Skip to content
Home » VPN Review » NordVPN Vs. ExpressVPN- Which One Is The Best To Use?

NordVPN Vs. ExpressVPN- Which One Is The Best To Use? Which Provide Better Privacy and Security? Who works better in Downloading Torrenting? Does These providers Work With US Netflix? Let’s find out.

NordVPN and ExpressVPN are the two most hyped-up service providers in the industry. Both of them have been exceptional in performance and features. However, the question is, which of the two is the better option to use? To provide you with a detailed comparison of NordVPN Vs. ExpressVPN, I tested these service providers on different criteria. So, to know which is better to use, stick with us till the end of the article.

Both the service providers have quite a few things in common, but some noticeable differences in speed, privacy, and security make one of them stand out from the other. These differences also have a significant impact on your buying decisions. If you want to learn about each service in detail, you can check complete NordVPN and ExpressVPN reviews. But, if you want to know which is the better choice, then stick on the same page.

Before diving deeper into the comparison of the two service providers, look at the table below and have a quick overview of their features.

Now, let’s begin with the detailed comparison of NordVPN Vs. ExpressVPN.

Both NordVPN and ExpressVPN encrypt our data traffic using AES-256 bit encryption, which is the highest standard in the industry. But, both service providers use different encryption protocols that impact their performance.

Besides using the mainstream OpenVPN and IKEv2 protocol, NordVPN uses the NordLynx protocol built around the WireGuard protocol. Though WireGuard is a new invention, it maintains fast connection speed.

In contrast, ExpressVPN uses OpenVPN, IKEv2, L2TP/IPSec, and its released proprietary protocol, ‘’Lightway’’, ensuring maximum speed and security. As the name implies, it is light in weight, meaning that the code is shorter than OpenVPN and can be easily audited for any vulnerability. The “LightWay” uses two ciphers, i.eAES-256-GCM and ChaCha20/Poly1305, which further increases online security and leads over NordVPN.

Though ExpressVPN doesn’t have a SOCKS5 proxy and a double VPN, it isn’t any less than NordVPN.  The SOCKS5 hides your IP address but does not encrypt while torrenting. While the double VPN feature twice encrypts the data but slows the internet speed, it isn’t a good feature to use either.

NordVPN uses CyberSec technology to block unwanted malicious ads and websites aiming to infect you with phishing attacks or malware. Whereas in ExpressVPN, the zero-knowledge DNS does this job.

As a whole, ExpressVPN is more reliable than NordVPN in terms of security and encryption.

NordVPN and ExpressVPN are good options to consider when it comes to privacy. Both service providers are known for having a verified no-log policy.

Even the payment options determine the level of anonymity and privacy that the VPN offers.  Fortunately, ExpressVPN and NordVPN do accept payments via bitcoins and keep your identity hidden under the cover.

Both of them belong to a privacy-friendly jurisdiction. NordVPN belongs to Panama, while its opponent has its headquarters in British Virgin Island. The countries are not member states of the global surveillance alliance group. Also, they don’t have any mandatory data retention laws. This is why they don’t store any information like users’ IP addresses, connection timestamps, or traffic logs.

Both the VPNs have been subject to external audits to prove their stance on zero-logging policy. PWC audited NordVPN in November 2018 and May 2020. While ExpressVPN was also audited by the same audit firm in July 2019.

Even though both companies have audited their log policy, ExpressVPN can be trusted more than NordVPN. Two years back, NordVPN was in the news for a hacking incident. Several questions were raised on NordVPN’s integrity. But investigation revealed that hackers gained access to all expired keys, and thus,  no data was leaked. Because of all this, customers might find it hard to trust NordVPN again but still, it’s the best.

Since 2017, the Chinese government has been blocking the access of several unauthorized VPNs. Only a few service providers with exceptional security features and advanced technology can bypass the censorship filters imposed by the Great Firewall of China.

Fortunately, ExpressVPN and NordVPN can bypass the high censorship filters in China. All credit goes to stealth mode that prevents Deep Packet Inspection used by China. In NordVPN, it’s called obfuscated servers, while in ExpressVPN, it’s the stealth mode. This feature disguises the VPN traffic as regular traffic and helps to bypass the censorship in China.

Apart from this, both the service providers hold servers in China and neighboring countries such as Japan and Taiwan. This way, connections are established in a short time frame.

NordVPN also has an extra security feature known as the ‘’Double VPN’’. It adds an extra layer of encryption to increase your security, but avoid it from using because it causes slow speed.

Therefore, I would say that ExpressVPN is a better option to use in China.

NordVPN has twice as many servers as ExpressVPN.

ExpressVPN has its server network spread in more countries than NordVPN. But since the Panama-based VPN has more server options, it wins over ExpressVPN.

Compatibility with Other Devices and Platforms

Both NordVPN and ExpressVPN are compatible with all major devices and operating systems so, it’s a tie here.

NordVPN allows multiple connections up to six devices, while with ExpressVPN, you can connect to five devices at a time. NordVPN’s extra device connection doesn’t make much difference, so there’s a tie in this area.

Like security, speed is another vital element while evaluating a VPN. No one wants to use a VPN that offers slow speed no matter how good it performs.

Both NordVPN and ExpressVPN are reliable to use as they provide sufficient speed for downloading, streaming, browsing, and gaming. NordVPN offers consistent speed across all servers, while ExpressVPN is even faster.

To test these claims, I decided to conduct a speed test of both providers. During the trial, I used the speedtest.net tool. First, I tested both VPNs on local servers. NordVPN gave good speed on local servers in the US. The only issue I faced was high pings.

Whereas, ExpressVPN gives off reasonably good speed without any connection lags.

But when tested on international servers (I chose the UK), NordVPN experienced an average speed loss of 5% compared to ExpressVPN’s 4% and lower pings than the US server.

From here, it is clear that ExpressVPN provides incredibly high connection speed with lesser pings. This makes ExpressVPN faster than its rival, even when the difference is minimal.

First, I tested both VPNs for Netflix and was impressed by the results. Both of them successfully unblocked Netflix, and I didn’t experience any buffering or connection lags. But, in comparison, ExpressVPN works better on Netflix than NordVPN. I was able to unlock more Netflix libraries with ExpressVPN than NordVPN.

ExpressVPN also worked well on other streaming services except for BBC iPlayer. I faced severe connectivity issues while accessing the BBC iPlayer. I took to Reddit to know if someone had experienced the same problem. I was overwhelmed by the responses as other users said they couldn’t access the BBC iPlayer with ExpressVPN. 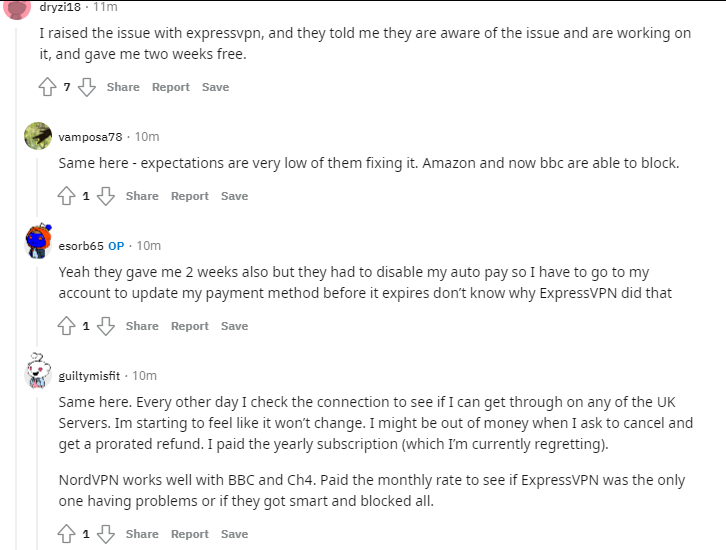 Nevertheless, like NordVPN has access to more server networks, it also helps unblock foreign content from more streaming services. Unlike ExpressVPN, NordVPN can unblock BBC iPlayer. But, when it comes to streaming on Netflix, then no ExpressVPN strikes its competitor.

Which Best FOr Torrenting

One main reason why people use a VPN is to download torrents. Downloading torrents without a VPN can reveal your IP address to your ISP and can put you in great trouble. Therefore, you must use a VPN while torrenting.

ExpressVPN and NordVPN come with unlimited bandwidth and thus allow unlimited torrenting. Since both of them are free from VPN leaks (IP, DNS, IPV6 leaks), it is reliable to use these VPNs for P2P file sharing.

NordVPN has a vast server network when it comes to torrenting. It offers more than 4,000 P2P optimized servers, while Expression has only 160+ servers for torrenting.

But since speed and security also matter while torrenting, ExpressVPN is no less in this area. ExpressVPN is much faster than NordVPN. It uses its recently released Lightway protocol, famous for maintaining high speed while downloading and ensuring security by changing the security layers to deliver quick results with enhanced security.

Both VPNs are a good option to consider while torrenting. NordVPN offers more server options while ExpressVPN torrents at a higher speed on all servers. So, for me, this is a tie.

Customer support is another area which you can’t neglect. No matter how good the VPN is, it’s not good to use if it doesn’t have a responsive customer support team.

ExpressVPN and NordVPN claim to offer excellent customer support to their users. Both VPN’s websites are full of knowledgeable material such as FAQs, blogs, support centers, and setup guides to offer more help to the customers. NordVPN has its YouTube channel, while on ExpressVPN’s website, one can find several video tutorials.

Moreover, both have email support and a 24/7 live chat option with trained and competent experts to deal with customers’ queries.

But to test these claims, I looked for authentic reviews from other users on Reddit. I’m also attaching the screenshots below. Have a look: some of them years ago, few found.

Price Comparison With Both

NordVPN is more budget-friendly than ExpressVPN. It offers more extended subscription packages to get the best value out of it. Below is the comparison of both service providers’ pricing plans.

Have a look and decide.

Both NordVPN and ExpressVPN offer a 30-days risk-free trial period to the users followed by a 30-days money-back guarantee. However, ExpressVPN on their website claims that a free trial is available for certain mobile devices. Moreover, ExpressVPN further says that if you have paid via cryptocurrency, the refund amount can differ from the amount you actually paid. There’s no refund for NordVPN users who’ve bought the service via Apple Play Store.

In general terms, there is no VPN provider that would proceed with a refund, if you pay through Crypto, Apple pay, or Gift cards. These are the best ways to buy with privacy, where you don’t leave any personal information with them.

In both account settings, there aren’t any cancellation buttons or links; however, contact the NordVPN and ExpressVPN customer support team to get your refund money.

Also, for payment, you have a variety of options to choose from. This includes:

Even though both of the VPNs’ prices are slightly higher, I still think that NordVPN is affordable because it offers a subscription plan that lasts for three years. Also, it does have a free trial option. So, when it comes to pricing and the free trial period, NordVPN is the winner.

NordVPN Vs. ExpressVPN Whos the Winner?

This was almost one of the most challenging battles between the two top service providers. It was tough to declare who the winner was, but we had to choose one after a detailed analysis of NordVPN Vs. ExpressVPN I concluded that ExpressVPN overtakes NordVPN in many categories, particularly security, privacy, and speed.

The British Virgin Islands-based VPN turned out better for streaming Netflix and torrenting too. But I’d crown NordVPN for having an extensive server network and affordable price.

As a whole, both of them have set the benchmark for quality in performance, but if we’ve to choose, then ExpressVPN is the winner.