Skip to content
Home » Internet Throttling » ISP Blocking Your Connection Speed? Here is How To Bypass It

ISP Blocking Your Connection Speed? Here is How To Bypass It 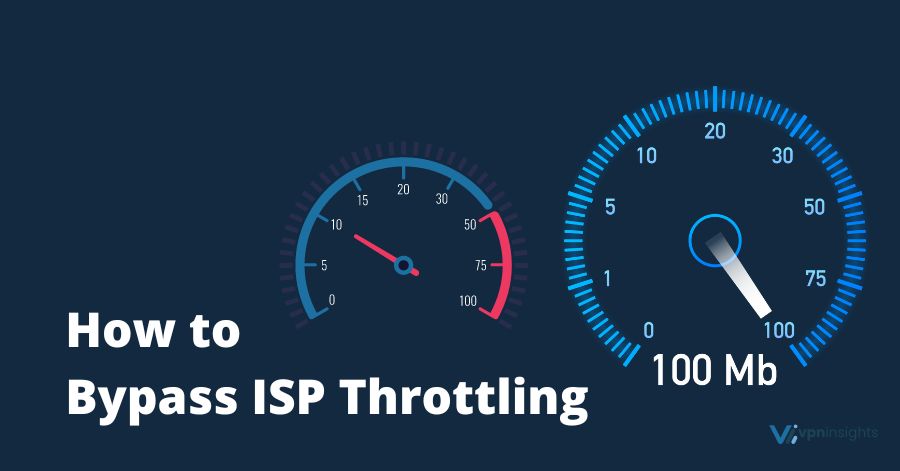 A fastest VPN provider such as NordVPN or Surfshark VPN can help ensure the utmost online privacy and security any netizen needs. While many might not recognize it, ISP throttling is one major hindrance to achieving online freedom.

This constant monitoring, supervision of internet activity, and bandwidth throttling violate user privacy. ISP throttling is a sneaky practice, even though it is extremely common. However, anyone who is vigilant enough can put a stop to it by looking out for one of the many symptoms of ISP throttling, such as:

Anyone facing such issues is a victim of ISP throttling, and this guide is a comprehensive solution to this issue. So if you are willing to bypass ISP throttling, read along!

Is using a VPN the Best Way to Avoid ISP throttling?

VPNs are the best way to provide online privacy and security by encrypting user internet traffic and passing that information through an encrypted tunnel. Because ISP throttling occurs as a result of constant monitoring of internet traffic, the encryption provided by VPNs successfully aids in its circumvention. To avoid ISP throttling, take the following steps:

Using these steps can help you successfully bypass data throttling issues. However, while doing so, you must ensure that you choose the best VPN in terms of speed, performance, features, and reliability. If you don’t consider these factors, you might face various privacy or performance-related issues.

Moreover, while choosing the best VPN for bypassing ISP throttling, some specific features to consider are:

We have tried and tested numerous VPN providers to hand-pick the best based on these criteria. Amongst them, the following three VPNs are best for bypassing throttling.

This Panama-based VPN provider holds this reputation as the fastest, most secure and easy VPN to use. NordVPN proves to be one of the best for online privacy and bypassing ISP throttling thanks to outstanding features such as:

NordVPN offers its users several extra privacy and security features such as Onion over VPN, Kill Switch, and Double VPN. These features provide an extra layer of security in different circumstances, allowing users to remain hidden from ISP or any online snoopers. For torrenting and streaming, NordVPN is known to provide high speeds and a stable connection.

The VPN has a strict no-logs policy and an external log audit report by PwC Switzerland to prove its integrity. So anyone interested in enjoying a hassle-free internet connection can download NordVPN from www.nordvpn.com.

This fairly new VPN provider offers exceptional security features while promising the utmost privacy. Not only does it have a secure jurisdiction within the British Virgin Islands, it also has a very strict no-log policy, which is backed by a log audit report. Additionally, Surfshark also has numerous robust features that help its users bypass ISP throttling, such as:

Although this baby shark is still fairly new in the market, its exceptional security features allow it to stand out amongst several VPN providers. Surfshark offers a camouflage mode for its users that completely hides your original browsing activity from your ISP, making it appear mediocre.

Moreover, the VPN supports torrenting and P2P with clients through optimized servers and other dedicated features such as the Socks5 proxy setting. The VPN provider comes with integrated malware protection known as “clean web,” which promises to secure a secure online browsing experience.

Surfshark performs admirably in terms of online privacy and security and bypassing ISP throttling. It also works compatibly with Netflix and other streaming sites. So anyone interested in exploring the internet freedom Surfshark offers can download this VPN from www.surfsharkvpn.com

Ivacy VPN claims to be the best VPN service on the market. Despite its location in Singapore, a five-eye jurisdiction, the VPN provides exceptional privacy and security through features such as:

In keeping its promise of providing privacy and security, Ivacy VPN follows a fairly strict no-logs policy. Aside from that, it offers a service compatible with a wide range of platforms, including Android, iOS, Xbox, Windows, Mac, and Linux, as well as Smart TVs.

To bypass ISP throttling, its users have the freedom to choose from the 100+ locations it offers. Moreover, for uninterrupted privacy and security, Ivacy VPN also has an active working kill switch protection. So if you think Ivacy is the one VPN for you.

What is ISP Throttling and Its Causes?

While considering methods of bypassing ISP throttling, it is important to dive into the concept behind it. ISP or bandwidth throttling is used to describe this practice of slowing down users’ internet speed. Admittedly, ISP throttling seems somewhat enraging and is frustrating to experience. ISPs have several reasons for throttling your internet connection, such as:

VPNs are the ultimate solution to getting rid of ISP throttling that you might face caused by any of these given issues. However, while ISP throttling is common, it is also crucial to realize that speed degradation can happen due to numerous other reasons.

For instance, if your visiting website has its servers down, this could create speed issues. Also, there could be speed degradation after a user reaches the data limit of their internet package. Therefore, if you are facing degradation of speeds, you can try and check for ISP throttling before jumping to any conclusions.

In layman’s terms, the simplest answer to this query is that ISPs throttle your internet connection by monitoring your web activity. VPNs help bypass it by encrypting all your internet traffic and successfully hiding it from your ISPs’ snoopy eyes. Some common cases due to which ISP throttling occurs are as follows:

With this, since your web activity is completely hidden from your ISPs, there is no chance of data throttling due to streaming, torrenting, accessing restricted content, or any similar activity.

Data caps are another big reason for ISP throttling, and VPNs can help you eliminate those limitations. VPNs have several servers in various countries to which data is routed as soon as it leaves your computer, providing you with a pseudo location.

Apart from that, VPNs also mask their user’s original IP addresses with fake ones to maintain online anonymity. This secrecy helps obscure your online identity and hide you from your ISPs, so they remain unaware when you have exceeded your predefined data limit.

Why is VPN the best solution to ISP throttling?

Online privacy has become a scarce concept; therefore, privacy tools such as VPNs have gained immense popularity. Along with being an excellent solution for bypassing ISP throttling, VPNs also have a hoard of several other benefits that you can exploit, such as:

While VPNs are the ultimate privacy tool, not all VPNs provide the security they promise. The massive rise in VPN popularity has led to many fake VPNs appearing in the market. Therefore, if you consider getting a VPN to bypass ISP throttling, reviewing reviews thoroughly before selection is best. We have recently tried and tested NordVPN, providing great speeds, a steady connection, and robust security.

How to Bypass ISP Throttling On Windows, Android, iPhone, and T-Mobile

While VPNs are the best solution to bypass ISP throttling, getting rid of these issues through various other means is possible. However, before proceeding with these solutions, do remember that they can still leave you partially vulnerable to ISP throttling and other online privacy issues.

For each device, do a speed test before and after connecting to a VPN to feel the speed change noticeably. If there are no significant speed changes, the slow connection could be caused by something other than ISP throttling.

ISP throttling is a very common issues and since it’s a sneaky problem there are several issues related to it such as follows:

How can I perform a Speed Test?

Speed tests are easy to perform. To get accurate results, be careful to first run a test without a VPN connection to get the original ISP provided speeds. All you need to do is follow the given steps:

How to avoid ISP throttling while torrenting and streaming?

The easiest solution to avoid ISP throttling while torrenting and streaming is to get a VPN. Since a VPN masks user identity, and hides user activity through encryption, whenever you torrent or stream your ISP will remain in the dark about your activity and therefore won’t be able to throttle your internet connection

Can ISP throttle even if I use a VPN?

With the increase in VPN demand, many illegitimate VPNs and even free VPNs on the market provide inadequate security and privacy.So if your VPN is not secure enough you are likely to face ISP throttling

The internet health tests tool employs M-Labs infrastructure and code to route all of your traffic to a device operating outside your ISP’s network and serving as a measuring point.

It can detect any signs of restriction between your ISP and the specific measuring point, making it a reliable tool for detecting ISP throttling. It is recommended to run the test weekly to ensure authentic and reliable results.

How to avoid using your ISP server?

ISPs frequently throttle a user’s connection to reduce traffic load on its servers. However, windows users can manually get rid of this problem through the following steps:

Because of the change in DNS requirements, internet requests will no longer have to go through your ISP’s servers.

Internet speed issues are one of the most frustrating online problems, whether caused by ISP throttling or another factor.However, with the advent of privacy tools such as VPNs, achieving online privacy and freedom does not entirely seem like an impossible task. Hopefully this guide proves to be helpful in bypassing ISP throttling and allows you the interrupted internet connection you deserve.